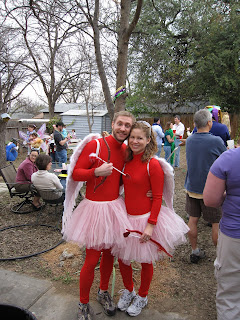 Jason and I have met a few friends and neighbors in San Antonio. A couple from New Orleans that live one street over, Jennie and Hugh, host an annual Mardi Gras party. We were told to come in costume. Just in case you weren't sure if Jason is secure in his manhood, this definitely proves it to be so. Sheryl Crow's next big hit should be "Are you man enough to wear a pink tutu." Anyway, they crowned a new king and queen, and then we had a parade down the street, and into San Pedro park, and back again. Jason had a few too many Bloody Mary's and we had a lot of fun. View more pic's at the dropshots website (dropshots.com/seatsam).

Over the past few weeks, I have been working on getting the guest house project going. I will not go into details, but I hit a few snags in the pursuit of getting a building permit for the shed addition behind the guest house, and am just getting a remodel permit for the interior instead. I have spent more hours of my life down at the San Antonio Development and Business Services Office than I ever wanted, and it was extremely frustrating. I have made a little progress in the job search, and have an interview lined up on Tuesday.
Posted by Amanda at 5:56 PM No comments: