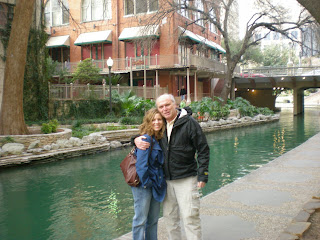 I just put my Dad back on the plane to Peoria. He visited for an extended weekend trip. Behind our main house is a guest house, or the "Carriage House." It is currently uninhabitable. It needs walls, floors, plumbing, electric, and heating/ cooling work. I was told that there was a fire in the Carriage House in the 80's, and it has not been fixed or really lived in since. Anyway, I needed my dad to visit to help us draw up plans so that we could get this project started. So, Dad worked a lot during his visit, taking the measurements, drawing up the plans all day Saturday and Sunday. Then we started meeting with contractors and working on getting the building permit on Monday and today. I was exciting to get the project started and to have a better vision of what it will become. There's still a lot of things I need to do before the job will actually get started, so that's what I'll be doing for the next couple of weeks. It's going to be beautiful when it's all done- and I'm painting the guest bedroom pink!
Posted by Amanda at 4:05 PM No comments:

The past week has been consumed by Jason losing his wallet. It appears that about once a year, Jason casts his wallet upon the floor or ground somewhere, as an experiment to test the current state of kindness in humanity. Last year, during 2007 Christmas season, about when you start to feel like if you hear one more Christmas song on the radio while stuck in traffic going to the store you will freak, Jason lost his wallet. It was also around this time when I had been receiving a string of annoying phone solicitations, and was getting tired of it. Instead of politely declining, I had begun to deal with this by stating that the wrong number had been called. I know, rude. One afternoon when I had returned from work, and Jason was still at work, a man called us on the phone. He didn't quite know how to pronounce our name, and I told him he had the wrong number and hung up. He called again, and I repeated my previous actions. A few minutes later, an irritated man appeared on our front door step, and said he did call the right number, he was just trying to return my husband's wallet, which Jason had dropped on the sidewalk earlier that day. Never have I felt so bad, and so rude in my entire life. I actually couldn't pull myself together to speak to him. Called hubby, Jason didn't even know he had lost it. So, I baked the neighbor a tin of cookies and had Jason deliver them to him to say thank you.

Last Wednesday evening, Jason got out his wallet to have his gym card swiped when we got to the gym. The next morning, time for me to drop him off at work, and his wallet was missing. It was either at the gym, somewhere in between the gym and where we parked our car, in the car, or at our house. We looked everywhere, asked everyone. Called the credit card companies, no charges were made that were not made by us. I thought about the missing wallet all day for days. Finally, we gave up, and canceled the cards, ordered new ones. I was sad because I had just given Jason the new wallet as a congratulations present. We also decided to get Lifelock protection, and cancel unused, unnessessary credit cards. We went back to the gym last night, and as I was explaning that my husband does not have his gym card, he lost his wallet, the guy behind the desk said- "Oh, we have a wallet in our lost and found." Oh, it was Jason's wallet.

I can't wait for Jason to lose his wallet next year.
Posted by Amanda at 12:46 PM 1 comment: 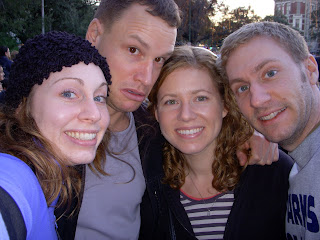 After Christmas, Jason and I made an uneventful 14 hour drive back to San Antonio with Angel, the dog, in the back seat. The only car ride she ever goes on is over to Mom and Dad Seats' house. So, I imagine she thought we got really lost. Angel likes the big yard at this house.

Our first visitors to San Antonio arrived last Wednesday, New Years Eve- my brother Joe and fiance Michelle. We've been having lots of fun with them. Here's a photo of the 4 of us on New Years Day at the Alamo, one of the few places open on New Year's Day.

We have made some major progress on the boxes and I'm learning my way around the new kitchen. It's funny how you can completely lose your groove when you're just not familiar with the location of everything. Nothing is automatic for me anymore.
Posted by Amanda at 5:23 PM 1 comment: