I feel that a blog post on one member of our family is long overdue. We have a dog, her name is Angel. 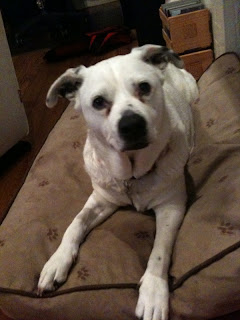 Here are the facts:
*Jason adopted Angel when she was a puppy, before we were married, and before we lived together. When my college boyfriend brought this puppy back to his college apartment, I never imagined that I would have to put up with her for so long. I thought Jason was just a fling.
* Angel was originally co-owned by Jason's college roommate, Steve. However Steve bailed, and left Jason to be the sole owner.
*Jason and Steve failed to train Angel, and she was actually borderline neglected until she moved in with me.
* Angel is a mixed breed, we don't know what she is. Everyone likes to guess.
* Angel is white, with a big black spot on her back, and black freckles on her ears.
* Angel is about 10 years old.
* Angel has developed a limp, due to arthritis in her front left elbow.
* Angel can do 'sit' and 'shake' very well. She's not so great with 'lay down' and 'roll-over.'
Here's a list of Angel's pro's and con's: 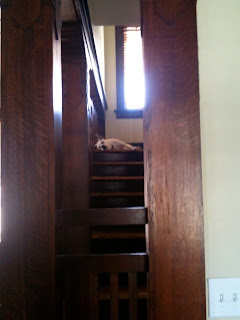 Con's:
1. And this is the #1 Con in my book. Angel sheds copious
amounts of white hair all over the house. Fur tumble weed develops about 3 days after the house has been thoroughly cleaned. Since we moved to Texas, we've have a cleaning lady clean the house once a week. The cleaning lady has saved my marriage. Angel doesn't have fuzzy fur, only hair. I have actually gotten Angel Hair slivers in my feet more than once.
2. Angel is stubborn and naughty and ungrateful. She wants to get on the furniture, despite the fact that there are 3 expensive and cozy dog beds located throughout the house. I bought "Scat Mats" that deliver a small (and perfectly harmless) electrical shock if she gets on the furniture. Angel will take a shock in order to knock the scat mats off the couch, or knock a pillow down on top of them, and get on the couch anyway. She'll get up on the couch, and then get down when she hears me coming down the stairs. After about 2 minutes on the couch, it is covered in hundreds of white hairs.
3. Angel barks ferociously at anyone who dares approach our property. The squeak of the front gate sends her into a barking fit. I shudder when I hear the door bell ring, as I know a barking fury will ensue. She runs back and forth barking at anyone who walks in front of our sidewalk until they are out of view. She gets even angrier about dogs approaching the property, or coming close to her on dog walks. Barking fits have been known to wake the baby.
4. Angel has a bad licking habit. She doesn't lick me anymore, because I have bopped her on the head a few times for it. People usually don't like to be licked by slobbery dog tongue. She also licks her dog beds over and over and makes yucky spots on them.
5. Angel makes gross salivary snorty licky sounds.
Pros's:
1. Angel is the perfect size for a dog, not too big, not too small.
2. As far as dogs go she's pretty cute. I like the way her ears flop over. She's the quintessential dog. Cartoon drawings of dogs look like Angel.
3. For the most part people seem to like Angel. She makes friends with about 90% of people she meets, once they are on the inside side of the fence or the door.
4. Angel makes cleaning up dropped food in the kitchen a cinch.
5. This Pro is the plus-side to Con #3, Angel barks at anyone who comes near the house, even Jehovah Witnesses. She makes me feel safe when I'm at home alone. She keeps the boogey-men away.
6. She's good when she's asleep, and she sleeps a lot now that she's a senior dog.
Wow! There are more pro's. I guess we'll keep her.
Posted by Amanda at 2:53 PM 1 comment: 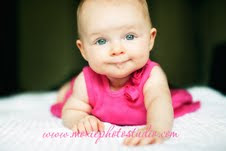 Not to put too fine a point on it, but it turns out this baby is a little high maintenance. When everything is just right she is happy, talkative, silly, and lots of fun. But, if she's too tired, a tiny bit hungry, or bored, she gets to be complainy. When she gets complainy, she bosses me around like a tiny elfkin dictator. I go around trying different things to make her happy, until I land on the right answer. I see other moms with their laid-back babies. "Oh, so you just put the binky in her mouth, and she stops fussing and falls asleep?" Isla spits that binky back out at us with force and says "How dare you put that fake, non-functioning plastic nipple in my mouth!" Isla doesn't like it if you aren't paying her enough attention, you can't leave her to entertain herself with toys on a blanket for more than 3 minutes. She requires frequent position changes, and changes in scenery. If I want to be hands-free in a sling or baby-carring device, Isla will only cooperate if she can face out, and she'll give me 15 minutes tops. Oh, and the stroller fan is not working. So, I ordered a special back-cooling insert for her to lay on in the stroller so I can do my stroller exercise group. Isla is just a little bit particular, and likes things 'just so'. And before you beat me to the punch line.... "I wonder where she gets that from?"

Isla has gotten really good with her hands. She reaches right to the toy she wants and grabs it. Then she puts it in her mouth, and eventually gets mad that she can't actually eat it. Rolling is still not consistent, but when it happens, its always from tummy to back. She has a whole repertoire of sounds and squeaks, and she sometimes gives us a taste of her little girl squeal to
come. She does her baby dinosaur talk "arararar" and B- bubble sounds. Some 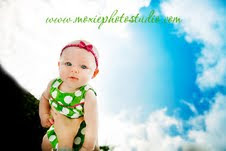 times she does these little soliloquies with changes in tone and facial expression. Isla has started to notice the dog. At 4 months she weighs 12 lbs 14 ounces and is 23 inches long. She is very snuggle-able. We're going to wait a little bit longer to try solids.
Posted by Amanda at 9:35 PM 2 comments: 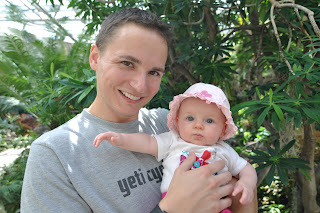 My middle brother, Jon, and his sweetie, Erin, came to visit us last weekend and meet new niece Isla. Isla took an immediate liking to her Uncle Jon. And Jon, a connoisseur of all things cute, of course fell in love with baby Isla. We've had a string of vegetarians visit us at the house (Brittany, Michelle, Maria). So, when we realized we had a group of all meat-eaters in the house, we went hog wild. Burgers with bacon, sausage, barbecue, ham omelets with breakfast sausage on the side... yum. We decided to detox on our last night together and ate at the all-vegetarian restaurant, Green (one of our favorites). 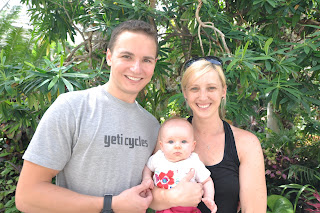 After our long string of visitors we are going to close the Carriage House for a while in order to address some neglected household organization issues and personal goals.
Posted by Amanda at 7:35 PM No comments: 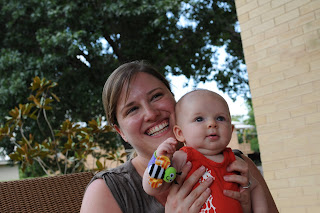 Our trip to St. Louis was immediately followed by a visit from Jenny. Jenny and I enjoyed a nice long weekend visit, packed full of pool time and baby snuggles. I have been dreaming of a professional massage since Isla was born. My back is constantly sore from the leaning over to do baby stuff. My dream came true with a girls' trip to the spa. Thanks for coming to meet baby Isla and spend time with us in San Antonio, Jenny! Come again when you need some Texas sunshine. 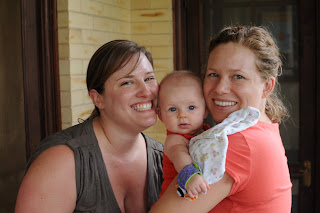