My Laptop has Herpes

One reason I like having Jason as my husband, is that he is good with computers, and I am not. If ever I, or anyone else asks Jason to "fix" their computer, the response is always the same. He'll start to work on it and then sigh, rub his chin, and say that the computer has a fatal illness. He'll tell you your computer is a paperweight, or that you should throw it in the pool. But, he'll continue to work on it, and eventually fix it. Well, my laptop started having some major issues last week. Jason did everything as I described. He said my automatic updates got turned off, and my virus scanners all got out of date, and then left my computer open for illness. I asked him how this happened, as he is responsible for my maintaining my computer, and I hand him my laptop on a regular basis for tech support. So, after several days of running virus scanners, and cleaning things out, it is running again. But, Jason said that my computer cannot be cured, and the virus software is just keeping the problem at bay. He said my laptop has Herpes, but is on Valtrex.
Posted by Amanda at 3:45 PM 2 comments: 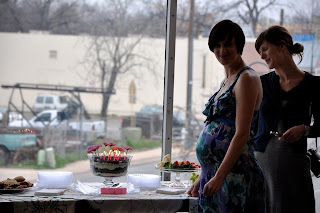 This is my friend Heather. Heather and her hubby Chuck live in our neighbor- hood. This photo was taken at her baby shower which the weekend prior to our baby shower. Heather was previously mentioned on Seatsleaf back when we adopted the orange kitty, David Hasselhoff. Heather spotted him first and was the kitten's foster mom while we were on vacation. It turns out Heather and I are both havi 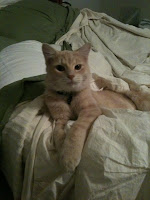 ng baby girls, due at the end March. So, we like to refer to David Hasselhoff as our fertility kitten. Let me know if you need to borrow DH for a short while, we can loan him out.
Posted by Amanda at 8:52 PM No comments: 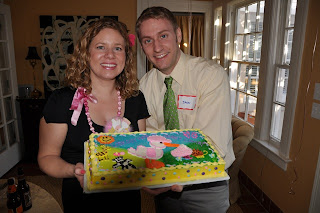 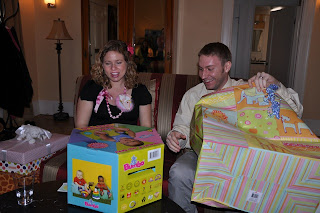 This past weekend Jason and I attended not one, but two baby showers. The first was a co-ed shower hosted by our friends Troy and Jaime. All of our San Antonio friends came to celebrate with us. We can't believe we managed to make so many wonderful friends in the past year. 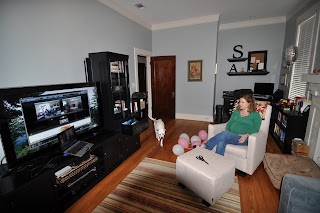 The second shower was a webcam shower thrown by Jason's family. I was video conferenced to the shower in Illinois over Skype. We have a big pile of baby stuff, and dozens of cute little girl outfits. Now we just need the baby. Thank you everyone for celebrating this exciting time with us and for helping us prepare for the little one!

Posted by Amanda at 1:16 PM No comments: