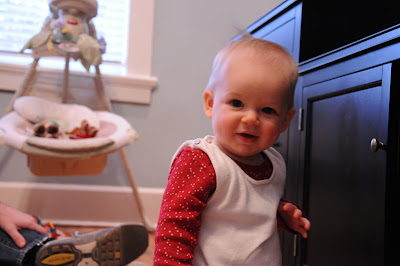 Snot. What's new with Isla. Well, the theme of the past month has been snot. Isla caught a 2nd cold a few days after recovering from the Christmas cold, the second one was worse- more snot, a deep cough. When things weren't getting better on day 4, we took her to the doctor and found out she had ear infections. We had a couple weeks of dreary rainy weather and with more head colds, and were feeling pretty couped up. I cringed when she wiped that snotty drippy nose on the couches, pillows, rugs, our clothes. If you come over to our house, just assume there is snot on everything.
A-yo. Isla has the dog's name (Angel) down and says it a lot. It's probably the 1st word she's using consistently and purposefully. Andul is always exciting and entertaining to Isla. She whispers it to herself when she's playing. The way she says it is just so cute and sweet, and irreproducible.
Snuggles. Isla likes to lay her head on soft things and snuggle- stuffed animals, pets, pillows. We always say "ahhh," when she does it, and she grins. Here she is snuggling with her gingerbread girl. 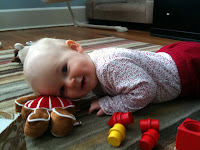 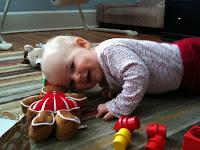 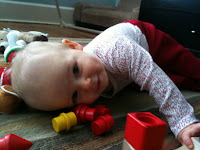 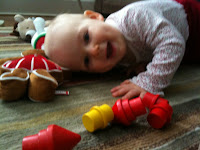 Books. Before this month, Isla used books as teethers. I kept reading them to her anyway. But now, she started showing interested in books. She likes to be read to and I got the paper-page books down off the shelf again. Sometimes she even entertains herself independently looking at books. And she likes the turn the pages.
Steady does it. Isla has gotten more and more steady and smooth with standing and cruising. She can crawl fast! She likes to pull up to doors and drawers and open and close them. This game can sometimes be hard on little fingers. Isla finally enjoys jumping in her jumperoo- I've been putting her in this thing since she was 4 months old. I was promised 45 minutes of content baby- I usually only get 5-10.
Catch and Release. Isla can release objects now. This has led to "clean-up" activities- like putting all the shapes into the shape-sorter box (just with the lid off). Isla also knows she is not supposed to put some things into her mouth. So, she looks at me and slowly brings the ____ (leaf, wood chip, piece of fuzz) towards her mouth and I say "Don't eat it." Then, she puts it by her ear instead. Isla thinks feeding herself soft foods is pretty cool- and loves pieces of bread with melted butter (who doesn't?)
Posted by Amanda at 8:25 AM 2 comments:

Finally recovered from Christmas, now I can blog about it 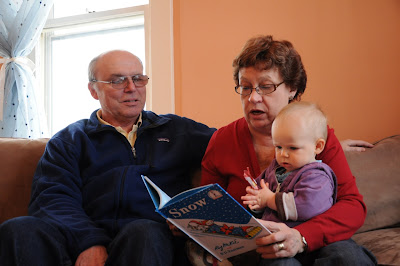 My little family made a trek back to the midwest for Christmas this year. First stop, Peoria for some time with my family. Then to St. Louis for time with the Seats' side. I am grateful that we narrowly missed some very bad weather (an ice/snow storm preceded our visit, and a terrible wind storm occurred the day after we left), and still got to enjoy a White Christmas in the Midwest. 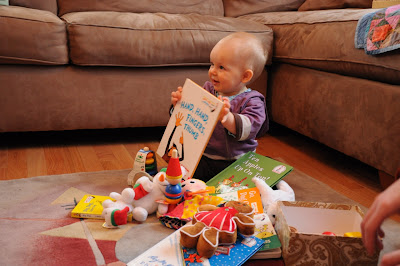 1st picture is of Isla with Grandma and Grandpa reading one of my favorite childhood books "Snow!" And here's Isla with all her loot. 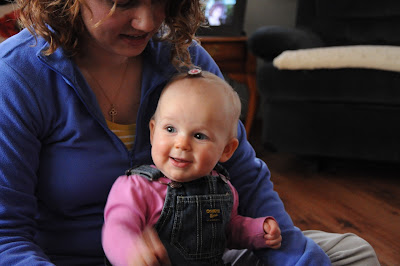 Christmas eve at Grandma and Grandpa's house in Cahokia. 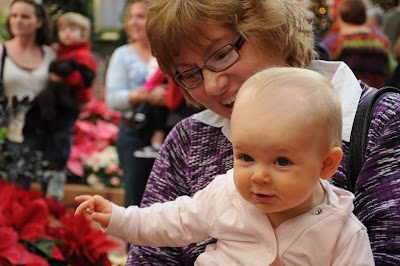 On our last day in St. Louis we went to the Botanical Garden train exhibit with Grandma Dolores.
Unfortunately, this trip wore me down. First, Isla and Jason were hit with a bad head cold, which caught up with me later in the week. During our holiday there were multiple nights of multiple baby wake-ups. After all the packing, bundling up, unpacking, repacking, bundling... well, I was worn down and ready to head home. When we got back to San Antonio we were greeted with 70 degree weather. Isla was so happy, sinuses drained, and we played outside on the lanai. 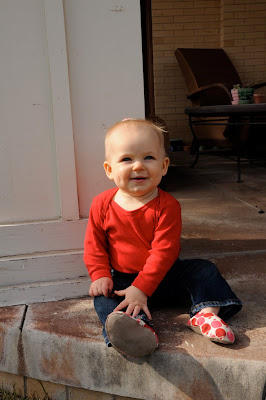