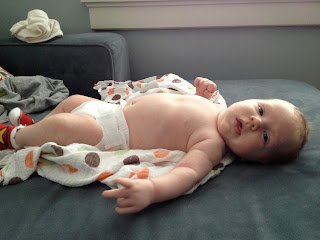 Baby August is growing!  Now 11 lbs 15 oz and 23 inches long at his 2 month appointment.  Apparently that mommy milk is doing the trick.  He now likes to interact with us, and smile, coo, and have little conversations saying "agoo."  He sometimes has a little smirk, like he is holding in a funny joke. 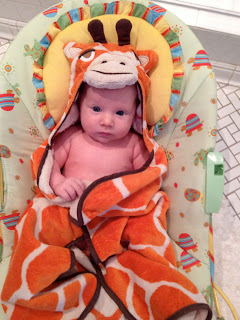 He is sensitive, and doesn't like it when I sneeze when he is nursing.  He likes a moving car, but cries at the stop lights.  August has moved on from binkies, and acts like they are an assault to his mouth.  But, if he's tired, we swaddle him up and stick him in the swing, and that usually does the trick. 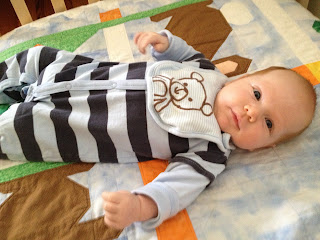 Around 2 weeks, he began a ritual of crying throughout the evening.  That has now subsided.  Gassy Gus!  This little guy farts and burbs like a sailor. 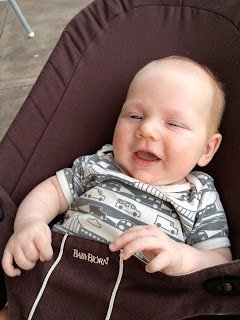 He often has a gassy tummy, and will not let you put him down for a couple of hours when that is the case.  After hours of holding this 12 lb bowling ball my arms, shoulders, and neck get sore.  But, then he makes up for it with a sweet smile and sometimes a chuckle.  His ginger hair is thinning, will he be a red-head, or something else?

Posted by Amanda at 1:21 PM No comments: