Jason is funny- part one

My hubby sometimes says funny things that make me laugh. Last week we met a friend of a friend who is a Physics professor at a local college- and she and Jason talked because Jason likes Physics. Jason later told me that he found out that he could take some Physics classes at the college without having to be a full-time student. Now, you may or may not be aware of this, but Jason's lifelong career plan is to #1 Be able to retire by age 35 and then #2 Find a source of renewable energy and solve the energy crisis. Now that he is well on his way to goal #1, Jason wants to get a jump start on career goal #2. I replied to the Physics class proposal, "Ah, yes. Then you can solve the energy crisis."
Jason said, "Yes, step 1."
I chimed in, "Step 1, take physics classes. Step 2, have a great idea. Step 3, use great idea to solve energy crisis. Step 4, win a Nobel prize. Step 5, Put your Nobel prize on a shelf."
Jason: "I don't want to put up a new shelf."
Posted by Amanda at 12:49 PM No comments:

We are now the proud owners of just one house

Our main objective for the trip back to St. Louis was achieved- we sold the house. I spent Wednesday afternoon at the house to complete the last of the throwing out the garbage and clean up. My friend Maria came over with a 2 year-old and a 3 month old to help me carry an old futon (this was Jason's original college apartment futon mattress that was later replaced by a new one- why we kept it for the past 7 years, I do not know) out to the dumpster. Then Jason and I went to the title company to sign papers. The moving truck should arrive some time in the next week, and then we will have all of our stuff in one home.
Posted by Amanda at 12:42 PM 2 comments:

Back in the Lou

We arrived in St. Louis on Friday evening for a busy week. We had my friend and prior roommate's wedding in Cape G, MO on Saturday. Casey was a happy, beautiful bride. We were a bit confused when she and new husband, Justin, were introduced at the reception to the tune of "Highway to the Danger Zone." Then, on Sunday, we had the 5th annual barbecue at Cameron's house. Jason was in charge of the washer's tournament again this year and kept everyone in line. My favorite was hanging out with my two-year old friend, Emma K. Emma and I spied a bunny in the next yard. He wasn't moving and I asked her "What's he doing?" She replied, "He's just hangin' out." Which was true. My Mom and Dad drove down from Peoria to visit also, attending the barbeque and helping us with the packing process today. Since my brother Jon stole all my furniture for his new apartment in Chicago, we decided we'd like to stay in hotels when we visit St. Louis from here on out. This trip we are at the brand-new Moonrise hotel in the Loop- it's sweet! www.moonrisehotel.com
After the dumpsters behind our house were too full for anymore of our house garbage, we headed over to Mom and Dad Seats' house for brother Kevin's 21st birthday. I saw Kevin drinking beer. I have to wake up early tomorrow to meet the movers at the house. Jason will not be waking up early- he took his brother to the Casinos.
Posted by Amanda at 8:50 PM No comments: 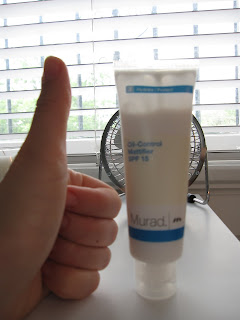 I hate it when about 4 hours into my day my face needs to be squeegeed. And any makeup I may have put on is around my ankles. Well, like I've mentioned before, it's hot in Texas, and this has been happening to me a lot. I had found a product to control the oil, that I put on under the sunscreen lotion- but the spf lotion was too heavy. Then I found this combo product. I would like to have little higher spf, but this stuff does the trick. If you need a little extra control 6 to 8 hours into your day, touch-up with those oil blotting sheets, and you're good to go. I found it at Sephora.
Posted by Amanda at 2:38 PM 3 comments: 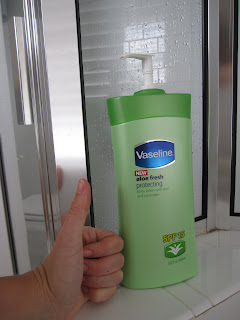 I have been trying to be extra careful about sunscreen now that I live in hot, sunny Texas. Sometimes you don't want to use the greasy stuff that you usually put on for a day at the pool, when you're just showered and going out to do errands, work, etc. So I picked up a bottle of this Vaseline lotion. It is light, and has a lovely subtle floral scent. I spent a day out in the sun at the King William's fair during Fiesta, and did not get burned. Great every day lotion, or for anyday you're going to be in the sun and don't need a waterproof sunscreen. Scent is very light, so okay for guys too. I found it at Target.
Posted by Amanda at 2:18 PM No comments: 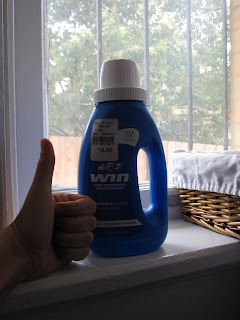 I saw this laundry detergent for sale in a Sports Authority. Maybe you have had the same experience as me. There has been recent development in the polyester fabric technology- and now you can find all sorts of fancy wicking workout clothes. "Great!" You think to yourself. No more sopping wet tee-shirts, you're going to look so fit and sleek in your new fitted workout tees. Only to find after a few wears and washes, you sort of stink. These clothes have a knack of holding onto body odor. So, this laundry detergent touts that it will rid your workout clothes of the stink. I pick up a bottle and head to the cashier. I ask her "Is this a total scam?" She didn't know how to respond and I head home with my laundry detergent and give it a try. IT WORKS!!!! Your clothes will smell so fresh and clean! I started using it on my sheets, and non-workout clothes. In fact- mix 1 part water and 1 part Win, and pour onto the armpit of any white shirts that may have the dreaded "butter-pit," and let rest for several hours- drastic reduction in butter-pit! I need to find this product in the economy size.
Posted by Amanda at 1:45 PM No comments: 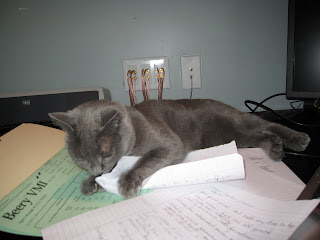 We recently discovered a new thing to love about our San Antonio home- there are cute, tiny lizards that live in our yard!!! One kind is a bright yellow-green and puffs out his pink throat bubble. The other is subdued green, and blends into the color of its surroundings. It is always a joy to spot one of these little critters... until today. Tweed was crying at the back door so I went to let her in. And, as she has been known to do at about a frequency of once every 1.5 years, she was at the door with a tail hanging out of her mouth. She went to put her present down on the ground to impress me with her critter-catching prowess- and it was a lizard, still alive, it scurried away. And she cornered it again, and it scurried again, and then got away for good. She was not happy with the results of her chase. Lizard 1, Tweed 0.

Here's Tweed attacking my paperwork as a try to work from home.
Posted by Amanda at 11:19 AM 2 comments: