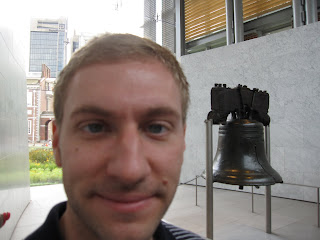 Jason and I returned from our weekend trip to Philadelphia over the past weekend. Our year of weddings marches on, this was wedding #3- Go and Mary. Go is a friend from college. He swam on the SLU swim team with me, and was roommates with Jason (and Angel) post-college years. Go moved out to San Diego after he couldn't stand anymore of living with Jason, and that's where he met Mary. Jason and I went out to visit them summer of 2005 (or was it 2006?). This video clip shoes a little dance routine that the wedding party did. You hear me make reference to Go breaking his front tooth at the 2004 wedding of Maria and Steve, during a break-dancing back flip. Needless to say, this was a very fun wedding. They hired the most awesome Philly band- Jellyroll. The day after the wedding we walked around Philly, and visited the bell, and ate a Cheese steak.

The video would not upload, look for it on dropshots.
Posted by Amanda at 5:29 PM No comments:

So, we've really gotten to the hottest point of the year here in San Antonio. We are told that it is not normally this hot, and that this year broke the 1998 record of days over 100 degrees. Also, there has not been much rain at all. Consequently, all the grass and plants are dying. One thing that took Jason and I by surprise is that when we turn on the faucets in our house, on cold, we get warm water. Back in St.Louis, I used to say I had a February Funk, due to it being the end of winter and being tired of being cooped up in the house all the time. I'm starting to feel that way about August here in Texas, but due to the heat. So, not much to say, other than "it's hot."
Posted by Amanda at 5:29 PM 1 comment: