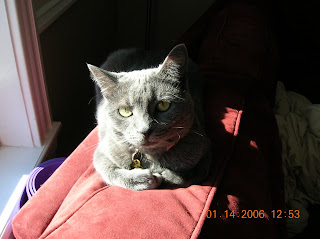 Before I tell you how it went transporting Tweed to Texas, first let me give you the background story on how Tweed became our kitty. Tweed was born in Macomb, IL in 2004. At the time, my brother Jon was attending Western Illinois University in Macomb. Jon has a huge soft spot for cute things in general, but specifically baby animals, kittens included. By this time in Jon's college career he knew the ins and outs of Macomb quite well. One day he came upon a place were alley cats were living, and found a litter of sickly-looking kittens. He just couldn't help himself, he reached out and picked up a little grey puff ball of a kitten and took her home, and named her Tweed. Luckily, the only illness that Tweed had was a cold, and after a few weeks living with Jon she was a healthy little kitten with a happy home. After graduation, Jon brought Tweed home with him to Mom and Dad's house in Peoria, IL where she lived for about 6 months. But Mom and Dad already had 2 cats. So, after Jason and I got married, we said that we would take Tweed with us to Saint Louis. After a trip home for Thanksgiving, we did just that. Tweed is a super cute kitty. She's a polydactile (extra toes) Blue Russian. Polydactile cats are sometimes referred to as the "Hemingway cats" known for living in Key West. She has huge paws that look like baseball mitts and one "snaggle toe." She has a sweet, curious personality.

Upon leaving our St. Louis home on Saturday afternoon, we put Tweed in her airline regulation carry-on kitty carrier. She did the usual crying on the ride to the airport, and while we checked in. Tweed pretty much cries the whole time she's in the carrier on the way to and from the vet. Then it was time to go through security. We didn't know this ahead of time, but in order to take a pet through security, you have to take it out of the carrier and walk through the metal detector with the pet. The carrier goes through the x-ray machine. This was very stressful for us. Jason took Tweed through, and I think site of the unfamiliar airport scared her so much, that afterwards she happily went back into the safety of her carrier and stopped crying. She was pretty good for the plane ride, and we encounter lots of cat lovers along the way who admired her. As long as one of us kept a hand in the carrier and petted her, she didn't cry. We opened up the lid a few times and let her peek out and stretch. The stewardess was a big cat lover and told us we could get her out (!). But we didn't want to risk her getting away from us. The plane was noisy enough where any mewing she might have done went largely unnoticed. During the descent and landing, she started to get a bit more antsy. It had gotten hot in the back of the plane (it was a crappy plane) and I think the heat and motion was getting to her. After we got off the plane she settled down and was very quiet. So it was a quick stop by Petco for litter and box, and then to the house.

Upon arrival at our house we heard an extremely loud and distressed sound of a cat crying. We thought maybe this cat was somehow trapped in our house, it was so loud. Outside our home we have a very large water reclamation vessel, called an ONG, or as I like the call it, the Honk. The Honk holds up to 400 gallons of water, and collects the water from the AC unit. We realized there was a cat trapped in the Honk!!! It's cry was being amplified by the hollow Honk. So not only do we force our kitty to spend 6 hours in a carrier, but we take her to this strange empty house where cats are apparently tortured. After a trip to the store for a flashlight, Jason got the cat out of the Honk by getting partway in on a step stool. The cat was cold and shivering; the water level was just low enough where the cats head was above. We're not sure if we left the lid off, or it was blown off by wind. Anyway, a neighbor who knew the cat belonged to another neighbor dried him off and send him on his way.

Tweed was pretty freaked out and after the carrier was opened for her, she stayed inside for the first hour. Then she went cautiously through the house. She seemed pretty unsettled for the first 24 hours in the house, but seems to be getting used to it now. She is eating very little, but there has been activity in the litter box, so all bodily functions are a go. She slept with us on the air mattress last night. She's a little more needy than usual, but I think she's going to like it here. She grounded to the house for now, maybe after a few weeks we'll take her out on the leash. I think right now she misses all her cozy places for nap taking, so after we get some furniture in here, she'll be much more happy. Tomorrow morning- moving truck arrives.
Posted by Amanda at 8:53 PM No comments:

It turns out moving presented us with some logistical challenges. Jason and I explored many variations of how we might move the 2 of us, 2 pets, 2 cars, and all our stuff down to Texas, and still leave our house in St. Louis staged. We also wanted to be able to live comfortably in our St. Louis home when we're in town, until the house sells. We also wanted to have one car in St. Louis, and one car in San An until the house sells. So here's the plan that was settled on and is in the process of being executed. The packers were here yesterday, everything that goes to San An is packed. The movers are here now, everything from the house that is going to San An is on a truck. Jason and I are flying to Texas with our cat (yes, cat on a plane) on Saturday. We will then rent a car and live in San An for the following week and a half. The moving truck will arrive on Monday. Before Christmas, we fly back to St. Louis, spend Christmas in St. Louis. Then, we drive down to Texas in J's car with the dog after Christmas. When the house sells, the rest of the stuff gets moved, and we'll have a 2nd road trip with my Civic. I was very busy the previous week getting everything organized for the packers. Many trips to Good Will and the dumpster were made in the process. There is nothing like a cross-country move to help you declutter. Now everything is on autopilot, the moving company took over. The biggest unknown right now is how Tweed the kitty is going to do on the airplane. We have the airline regulation size cat carry on, and she'll be our under-the-seat bag.
Posted by Amanda at 8:00 AM No comments:

I have received a lot requests for more house pictures. Here is the website to view all of my pictures. There are a lot of house pictures from Oct 30th and Nov11th. Enjoy!

http://www.dropshots.com/seatsam#
Posted by Amanda at 2:03 PM No comments: