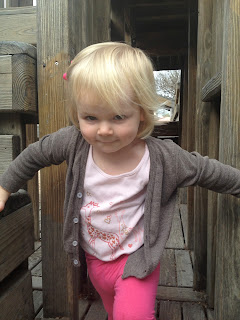 Isla is now 2. On her 2nd birthday, we went and saw "If You Take a Mouse to School" production at the Magik Theatre in San Antonio. Our friends Jacqueline and Jack joined us.  She loved the play. Afterwards, we played on the Hemisfair Park fortress playground. 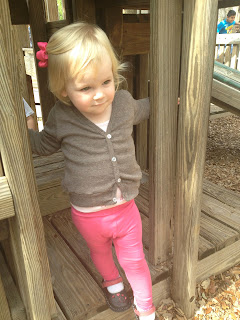 Isla is still my little motor girl and will always find something challenging and semi-dangerous on the playground, and then do that action over and over and over until she feels she's got it down. Here she is climbing a tree; she actually attempted to stand and walk on it. One her 2nd birthday she took on the climbing wall at the Cove. We couldn't get her to stop doing it long enough to eat. Long after her dinner was cold, she sat down and ate ravenously. 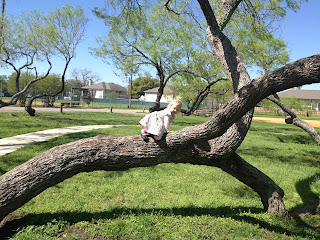 Isla is talking up a storm, and gabs away in her crib from the moment she wakes up, until the moment she falls asleep. The funniest thing she says right now it "I'll hold you, Dabid." Which means she wants to hold the cat. She also tells me "I'll hold you, Mommy" with outstretched little arms.  Which means she would like to be picked up. She loves to take care of her baby doll, and feeds her bottles and changes her diaper. She also spends a lot of time caring for her pet doggie. 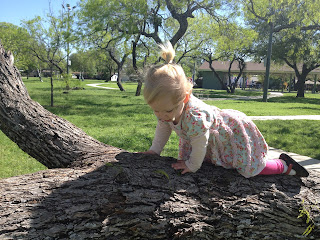 Isla has started to sing sweet little songs throughout the day.  The one that's the most clear is "Shoot, Fly."  She loves to take risks jumping across a ravine, like coffee table to sofa.  She often counts "one, two, three, four, seben, eight, nine, ten!"  She grabs books off her bookshelf and reads herself to sleep in her crib.  Isla is nice and sturdy.  This baby who started out so tiny (6 lb 4 oz and 18 inches), jumped ahead in the growth charts and is now at 60th for height and weight.