OH NO!!!  You're 1/2 birthday is already here.  My sweet baby boy, I just can't express what a sweet little cuddle bug you are.  Really, I can't, because I'm too tired.  In April, August began to sleep 5-6 hour stretches more consistently- Finally!  But, in May, he went back to waking up about every 3 hours, and pretty much wakes up just as much as he did when he was a newborn- as a 6 month old!  Being this sleep deprived for this long has really taken it's toll on me.  I don't do well on little sleep. 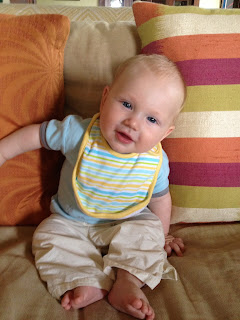 But, here's what else has been going on with baby boy.  On April 2nd he figured out how to roll.  He's gotten much better at sitting up.  Now, he loves to sit on a blanket with his toys and play.  With the boppy pillow around his backside, he can sit there for quite a while.  In April, he loved to play and bounce in the doorway bouncer, but now he thinks it's too constraining, and prefers to be on the floor where he can sit and roll about.  And, the day I've been waiting for- to make grocery shopping with baby so much easier- he can sit in the cart! 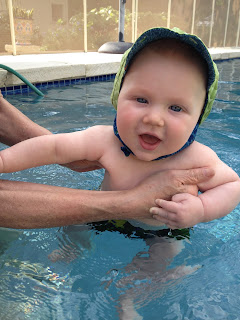 He is all smiles and giggles, and smiles at any familiar face who goes by, sometimes even unfamiliar.  He solicits a lot of attention from passer-by's.  He loves his toys, and seems like he's always gotta having something to play with, or he'll grab something he shouldn't have.  He's got the baby babble going on and loves to talk back and forth with me.  He has a great sense of humor.  When I'm silly with him, he stops, and smiles at me with this little glint in his eye.  Like, he gets it, he's in on the joke. 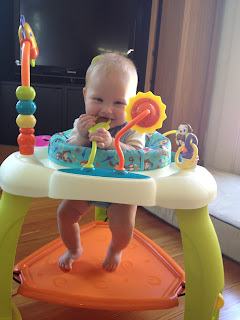