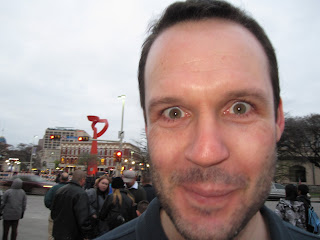 For the past week Jason and I have had the honor of entertaining our British friend, Paul, who was Jason's first Slicehost employee. It's nice having Paul around because he has a British accent, thereby making everything he says thoroughly entertaining. Plus, being British, he is the ultimate authority on what is rude, or not rude. So, if you're ever not sure what your rudeness status is at any given point in time, he will let you know. Last Saturday we went downtown for San Antonio's 2nd annual Luminaria festival. Here's Paul standing in front of the "Torch of Friendship" sculpture, which some San Antonians have dubbed the giant curly red pubic hair. Now, I can't see anything else when I look at it.
Posted by Amanda at 11:34 AM

I'll never be able to look at that statue the same way ever again, either!