This is the biggest-ever announcement of Seatsleaf- Jason and I are having a baby! We got to see this little person for the first time last Monday. The baby looks pretty cute- We could see him/ her much better on the screen at the doctor's office, the picture doesn't do it justice. Our baby is due at the beginning of April. 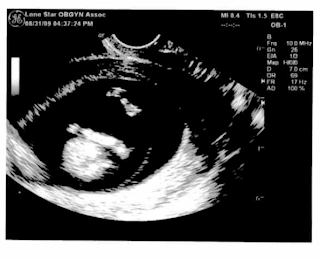 You may have noticed Seatsleaf has really gone down the drain lately. Well, that's because I have had a bad case of baby-related nausea, which sucks every ounce of motivation I have to do anything. I have been miserable for a month now.
Luckily the past week has gotten a little better, and instead of being nauseous all day, I'm nauseous in the afternoon and evening, and the mornings feel pretty good. Eating has become an extremely frustrating experience, as I don't feel like eating anything, and I've pretty much stopped making dinners for Jason. I don't have an inkling of ideation about would I should make for food, and what I should do wit 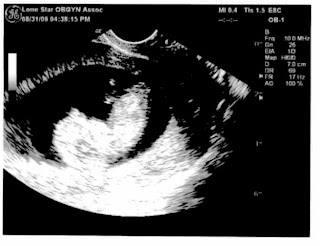 h myself. In addition to nausea, I have this disgusting chemical taste in my mouth which makes most things taste foul. Plus, lots of indigestion and heartburn. I have super-smell and foul smells send me into gagging fits. I can't brush my teeth without gagging myself. So, I can honestly say that pregnancy has been the worst experience of my life this far, and I really think that if all women experienced this, human population would decrease drastically with each generation and we'd eventually become extinct, because I cannot fathom anyone willing doing it again and again.
On a lighter note- today is Jason's and my 5 year anniversary. Happy anniversary hubby!
Posted by Amanda at 8:14 AM

Congratulations to both of you!

Such wonderful news - congratulations! And considering your input on my first pregnancy, I think I will soon begin to harass you with name suggestions, among other things ....

OK - I left my comment before I actually read the entire post. And I don't know if you remember, but the first trimester of pregnancy was just awful for me - I have never felt worse. Ever. I threw up constantly and the nausea never ceased. I finally figured out with No. 3 that, in order to get to work, I had to skip brushing my teeth - charming, huh?

But it does go away. Truly. By the fourth month, it had abated some, and by the end, I felt pretty good. And my labor/delivery was relatively easy - you can figure that you're paying your dues now. And I did go on to do it twice more, so the body is smart enough to get over these things. And when you hold that baby in your arms, you will know it was worth it.