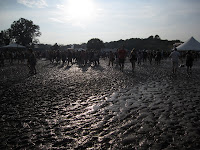 Last year about this time, Jason and I made our first-ever trip to San Antonio to scope it out and see if we could actually live here. On that trip we also went to the Austin City Limits Music Festival, a 3 day multi-stage outdoor concert in Austin's Zilker Park. Knowing that outdoor concerts just aren't the same without beer, I decided it would still be worthwhile to go again this year. 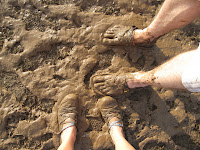 Due to inclement weather (and no beer), this year's ACL gets mixed reviews from me. In order to solve the "dust-bowl" issue that brought down previous ACL festivals, a lot of money was spent on new grass for the park. When we arrived on Friday, I marveled at the beautiful plush grass that covered the park. Then on Saturday, it rained, the whole day. Then all the thousands of people walked all over the grass churning and stabbing the grass down into the wet ground. By Sunday, it was a massive mud pie. I'm talking squishy, can't walk in flip-flops without losing your flip-flops mud. On Sunday, we headed straight to safety of our backstage access at one of the venues, and after a few hours we decided to brave the mud and venture out for some of the other shows. After squishing around in the stinky, gooey mud for a little while, Jason let me play the "I'm pregnant" card and we left early. The best shows for me- Kings of Leon on Friday night, and Henry Butler under the covered stage on Saturday.
Posted by Amanda at 9:37 PM

Cute Muddy Feet!! I love it when you update your blog!