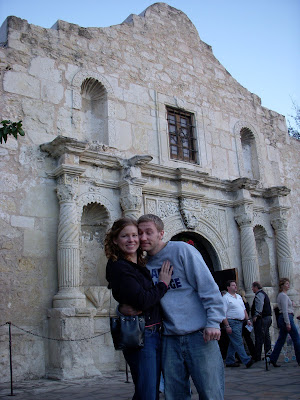 Jan 2009, Jason and Amanda
at the Alamo
After I wrote about "The Last Box," I realized that not only did 2009 come and go, but our year anniversary of moving to San Antonio, TX in Dec 2008 came and went, and I did not even acknowledge it.

It's funny now to think back on the days when Jason first mentioned the possibility of this move, that was Summer 2008, and I was in denial. And then when it became a very real possibility, I told him "I'm going to cry about this, a lot." I called my parents and was sobbing so hard they thought someone had died, so when I was finally able to communicate that we were probably moving to Texas, they were relieved. Back in the first months of 2009, I remember the frustration of unpacking, being alone all day in an empty house with mountains of boxes, that seemed to never to shrink. Plus, nowhere comfortable to sit because we moved with very little furniture. I also remember the frustration of trying to find my way around San Antonio, and the ridiculous outer road situation, and endless seas of parking lots. Sidebar: Along both sides of every highway in SA is an outer road, and if you miss where you wanted to go, you have to get off, take a "Turnabout" go back the other way, "Turnabout" again, and then try to find it again. If you miss twice, you will want to pull your hair out. All along the outer roads are endless mazes of stores connected by not well-thought-out parking lots. So that you can actually see the PetSmart that you want to go to, but can't actually drive your car there.

But then came Spring, we were mostly unpacked (except for 1 box), we had some furniture, we met some wonderful San Antonio friends, and lots of friends and family came to visit us, and we had so much fun. I woke up a few days with hangovers I had not seen since college and I thought to myself "I can't keep up with these people."

Then we started to travel- several times to St. Louis, starting with the sale of the House on Hartford, then California, then Portland... and then came end of July/August and the beginning of the dark period of 2009- 3 months of nausea. I still shutter to think of it. And I still hold fast to my conspiracy theory that the pregnant women who have gone before me lie about the horror of feeling nauseous for weeks on end, just so they can see other women go through it and laugh at them. But not me, I won't lie to you ladies.

But, by mid October I was feeling better, started to be able to be happy about the baby who is on her way, and we continued to travel, and I got a big belly bump. So that brings us up to date. The best thing that I will remember from the year 2009, is the wonderful friendships we have made since our move to San Antonio. And that has really made the time we have spent here memorable and, well, fun.
Posted by Amanda at 9:16 AM