After I pestered my Dad a few times to bring me some jars of Lecho (Lecho: A Hungariam stew base used to make Goulash, Chicken Paprikash, and other traditional Hungarian dishes) and peaches from Peoria, IL (my hometown), he suggested we can some of my very own jars when they were in San Antonio. 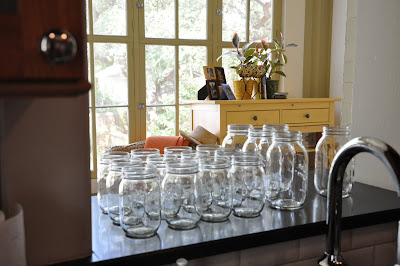 So, I made sure we had lots of jars ready by the time my parents touched ground in Texas. Then began the great quest for a deep pot. It needed to be deeper than the quart size mason jars to seal the lids and preserve the contents. We narrowly avoided day-long wild-goose chase by borrowing our neighbor Hugh's big Gumbo pot.
Next was the gathering of produce. Dad deamed the peaches at Central Market too expensive. So we tried the Pearl Farmer's Market on Saturday morning, but there were no peaches nor acceptable tomatoes. While Jason ran home from the Market, Isla and I were dropped off at home for nap time. Then mom and dad continued their hunt- next stop, the Olmos Farmer's Market. They had peaches, but they were too small. Luckily as Jason was running home, he spotted a peach-stand 1 mile from our house, called my parents, and they were hot on the trail-peaches from Virginia! They were so sweet we halved the amount of sugar in the recipe! After a quick stop by the HEB for the tomatoes, mom and dad returned home and began to stew. 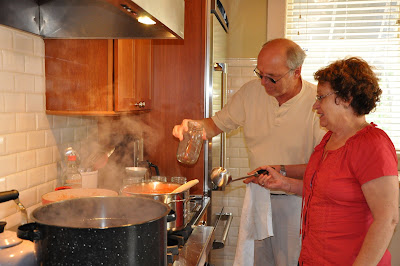 After all their hard work and effort- I have my very own stash of peaches, Lecho, and pasta sauce. They're so lovely, I just like looking at them. 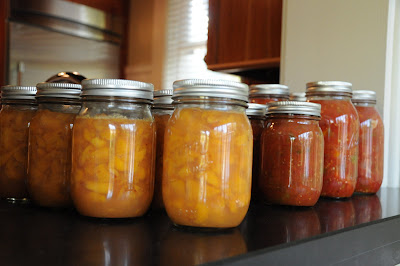 Hope you enjoy the fruits of this project. It was fun!