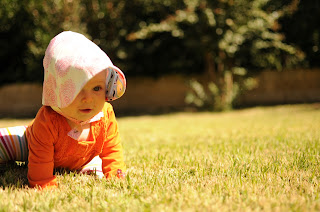 This has been another huge motor month for Isla. She mastered crawling during the 1st week of her 7th month, and was following me from room to room. Then by 7 and 1/2 she was pulling herself up to stand in the crib. One week later, she was climbing the stairs! Isla thinks she is a big girl, and sometimes she lets go with both hands and thinks she can stand independently. Isla needs lots of supervision these days to avoid what we termed "head konks." Oh, the inevitable head konk. You think it's okay to refill your coffee cup and return in a jiffy, but no. You will return 20 seconds later to a crying baby who konked her head in your brief absence. 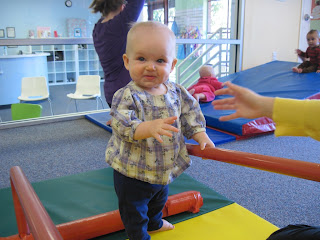 Enduring months of putting tired Isla to sleep in her crib and often letting her cry to sleep has paid off. She finally knows her crib means sleepy time, and is actually happy go into her crib for sleep. Sometimes she'll play around for a while, but the crying has ceased (for the most part). We followed the advice "If you put your baby down while she is sleepy, but not yet asleep, she will learn to fall asleep on her own." So, we enacted what we called the "10 minute rule," and let her cry for up to 10 minutes before going in. She usually fell asleep in less than 10, but it still wasn't fun. 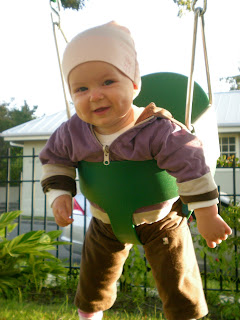 8 month old Isla has gotten out her little pointer finger to point at things. I just marvel at the fact that one day she just understood that she could draw an imaginary line form the tip of that chubby little finger and pointed, but the day before she did not. Isla has her pincer grasp going on and has mastered the art of eating "puffs." Puffs are like pre-Cheerio baby food, they dissolve quickly in the mouth. Puffs almost always make Isla happy, and can distract her during those crabby times. Isla loves music and bounces up and down on her bottom when we play a song she really likes. 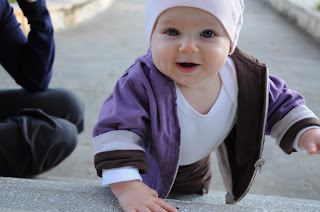 What a great smile!