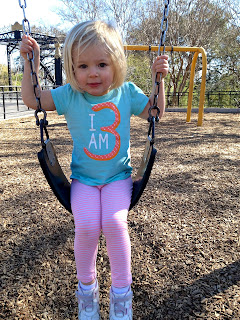 All the baby is gone, Isla is officially a little girl now.  Isla is very proud to be a big sister.  Her conversation opener at the moment is "I a big sister, have baby brother."  One of the funnest moments as a new family of 4 was one morning when Jason was about to carry August downstairs.  Isla reached arms out to him at the top step and asked to be carried too.  Then he shifted Augie over to make room on the other side and scooped up Isla.  Isla said to him, "You have two," pointed to August then herself, "Two animals."  Sometimes she introduces August to people, "This is baby August.  He was born."  She is protective of him and when other kids get too close, she gets upset and yells "He's Mine!" 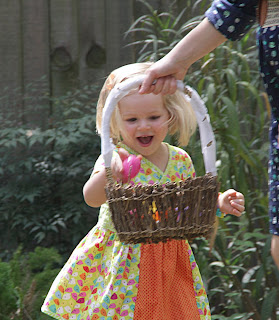 Too much is not enough

One peculiar aspect of Isla's personality is a lack of moderation- or as I like to say "Everything to the nth degree."  When she is excited about something she has to use it up, pile it high, and often plays with it until it is broken.  For example, I bought mickey mouse foam hand soap to encourage after toilet hand-washing.  Isla was in the bathroom washing her hands for a long time, leaving her hands chapped for several days.  After watching me tape her picture to the wall, she was excited about the tape, and created a vertical tape mound on the wall.  Here's a picture of Isla's valentine box.  I feel this box is a physical representation of my daughter. 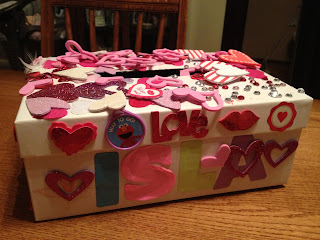 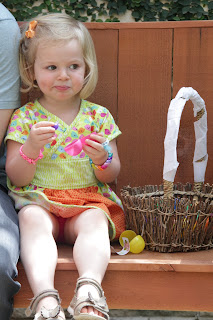 For Isla's 3rd birthday we went to the Magik Theater and saw the children's play "Rapunzel."  And then played on the Hemisfair playground.  And, for her party later that week, we had our friends, plus Gma and Gpa Lontai to our house for a skunk-themed birthday party.  My strong-willed girl has been putting me to the test.  Isla loves non-stop activity and excitement.  With the full attention of one adult, Isla is perfectly happy.  Without (even for just 10 minutes), she often turns to "very naughty deeds." VND's.  VND's to date: dispensing all the wipes onto the floor, emptying baby powder bottle in her bedroom, smearing Desitin all over upholstered rocking chair and rug in her bedroom, pulling tape out of a cassette (vintage 1980's Disney book on tape cassette meant for Isla to have "quiet time" as napping has ceased), taking a permanent marker to furniture, and cutting the strap of the doorway baby bouncer.  While her stubborn personality sometimes has me banging my head against the wall, I have been told that she will grow to be a very successful adult.  And, I remind myself that Isla was born into the right family.  A family with the time, resources, and patience to deal with a little girl who demands a lot.  Isla will tell you exactly what she wants and how she wants it.  Sometimes she is sneaky.  After being told "no more cookies" she said, "I'm thirsty, can I have some water and some cookies?"  I am glad to see in social situations Isla stands up for herself and uses her words- ie: "I don't like pushing, it's not nice!"  She said to the girl who pushed her in the bouncy castle.  You're right Isla, pushing is not nice. 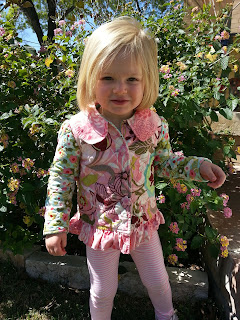 *37 month update*  Isla has dropped that nap.  But will still fall asleep in the car in the late afternoon.  After a month of being very cranky and unreasonable, we have adjusted to an earlier bedtime... and things are better!  Turns out the little girl just needed a bit more beauty sleep.  VND's have ceased.  Also, after several months of potty training regression (waiting to poop in diaper at bedtime) she decided it was time to poop in the potty again- yay!
Posted by Amanda at 9:08 PM